Worldwide there are nearly 33 million people infected with HIV, the virus that causes AIDS. Many of those do not know they are infected with HIV and will eventually die of AIDS. Kande’s Story is a true-to-life story based on accounts told by an African pastor about children in his community. Kande is a 12 year old African girl whose father and then mother die of AIDS. She and her five siblings are left orphans and must fend for themselves. The story tells of the many problems and dangers they face just trying to live. It tells how people in their community, especially people from the local church, helped them in their time of need. They also learn that by following God’s instructions for living, they can avoid getting AIDS themselves or spreading it to others. They learn how to love and care for those affected by the disease, working for justice for widows and orphans.

The ‘Kande’s Story’ materials and resources consist of: 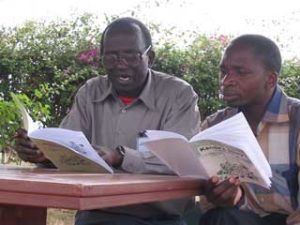 The materials, translated into the language spoken in a given community, are to be used in conjunction with Scriptures in that language. They are intended as tools to help communities become aware of HIV and AIDS, how to prevent their spread, and how to care for people affected by them. Currently the Kande’s Story books have been or are being translated in part or whole into 228 languages, mostly in Africa.

Where can we get the materials?
Kande’s Story Learner’s Book and Facilitator’s Manual are available in English hard copy from Paulines Publications Africa. They are available electronically on this site in PDF format in English, French and Spanish for viewing.

Send this to a friend